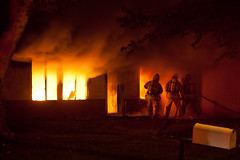 We have blogged about the First Responder Presumed Coverage Fund in the past. It was created by the Michigan Legislature in 2014 to help firefighters who have developed presumed occupational cancer.

Unfortunately, no money was allocated for the fund in the 2015 or 2016 budget. Many have criticized its creation as nothing more than political theater.

MLive.com is now reporting that the Senate Appropriations Committee has voted on a bill to put $1 million of one-time money into the fund for the current fiscal year. It is hoped that $3 million each year will be put into the fund as part of the regular budget process.

According to the article, 9 firefighters already needed access to the fund for cancer treatments.

How far does $1 million dollars go for cancer treatment?

Michigan workers’ compensation is supposed to cover all reasonable and necessary medical treatment. Cancer treatments can easily run into the hundreds of thousands each year for just 1 patient.

Lost wages are supposed to be paid based upon 80% of the after-tax average weekly wage. Assuming a maximum weekly benefit $842.00 per week, this is going to cost $43,784 per year for each firefighter.

A better solution is to fix workers’ compensation

Proving that cancer is caused by occupational factors is nearly impossible under current Michigan law. $1 million of taxpayer money is going to go very quick indeed.

We don’t need special rules for firefighters. Fix the burden of proof and let the responsible employer pay as intended.

9/11 responders continue to be diagnosed with cancer

Photo courtesy of Creative Commons, by Ada Be.