U.S. Supreme Court will not hear constitutional challenge to Florida’s workers’ compensation system and what this means for claimants in Michigan. 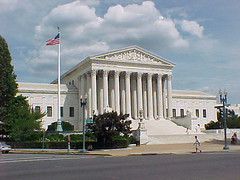 According to an article published by FloridaPolitics.com, the United States Supreme Court has declined to hear a constitutional challenge to Florida’s workers’ compensation system. This matter stems from 2003 legislative changes signed by Gov. Jeb Bush that made collecting benefits much harder. It was brought by a nurse who suffered a career ending back injury and received inadequate benefits.

We have blogged about constitutional challenges to state workers’ compensation laws in the past. It seems like “reform” efforts have swept the nation and this has resulted in a dramatic reduction in benefits. Federal lawmakers have even suggested that oversight is now required.

The National Academy of Social Insurance (NASI) recently found that benefits as a share of payroll have reached historically low levels nationwide. Michigan has seen a 18.6% reduction in total workers’ compensation benefits during the period 2010-2014. The pure premium rate has also declined nearly 40% since 2011.

Attorneys in Michigan have been openly discussing a constitutional challenge since 2011 amendments were passed. A 40% reduction of employer premiums does not happen in a vacuum and disabled employees are paying the price.

Michigan workers’ compensation is supposed to be a safety net. It is a compromise of employer and employee interests. Benefits are paid regardless of fault but are extremely limited.

Legislative reforms have gone too far and created an imbalance in the workers’ compensation system. Insurance companies are now permitted to use fake jobs to say a person is still employable. One of our clients saw his weekly checks reduced to just $19 per week.

It is disappointing that the United States Supreme Court has refused to hear the Florida case. However, the door remains open and future constitutional challenges are sure to come.