Michigan House of Representatives continues its attack on unions and why organized labor needs our support. 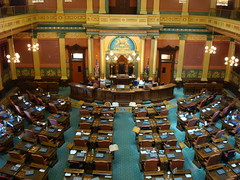 The Detroit Free Press has reported that anti-union legislation has been passed by the Michigan House of Representatives. House Bill 4643 would increase fines against picketers to $1,000 per day and $10,000 per day for an organization or union if deemed an illegal mass picket. House Bill 4630 would repeal a law requiring employers to include information about an ongoing strike when advertising to hire replacement employees. These bills now move to the Michigan Senate for action.

Unions have been under attack in Michigan for several years now. Right-to-work legislation was passed and signed into law by Governor Snyder in 2012. It severely weakened collective bargaining in our state.

We have noticed some ambivalence on this issue with our clients. Why should anyone care if they are not part of a union? The simple answer is that union advocacy benefits all workers even if they are not members.

Big corporations and special interest groups have been relentless in their attack on workers’ compensation. This resulted in 2011 legislation that made it much harder to collect benefits. These changes would have been much worse if organized labor did not help fight back. For example, an original draft of the law took away a person’s right to choose their own doctor. It also did not have language allowing for evidence of a good-faith job search to counter arguments about wage earning capacity.

Want to make a difference? Reach out to your elected representatives and make your opinion known. A telephone call or an email can have an impact!

Selecting your own doctor under workers’ compensation