Why employees of restaurants and food service businesses should support higher pay for fast-food workers. 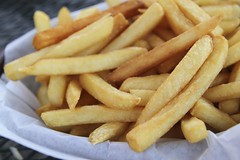 The Detroit Free Press is reporting on protests by fast-food workers to raise the minimum wage to $15 per hour. Detroit fast-food workers walked off their jobs last week to join with activists. They argue that economic security is a civil rights issue and liken it to the 1968 sanitation strike that was provoked by the death of two men.

According to the Michigan Restaurant Association, the restaurant industry is Michigan’s second largest private employer, contributing nearly $17 billion to Michigan’s economy annually. Critics oppose a $15 per hour minimum wage because it could result in job losses. Fast-food jobs are often entry-level and provide opportunities for people who could not otherwise obtain employment.

Michigan lawmakers raised the minimum wage in 2014 with gradual increases until it reached $9.25 per hour this year. We applauded this move as everyone deserves a living wage. Here are some other reasons why employees of restaurants and food service businesses should support higher pay for fast-food workers.

Safer workplaces for all

Statistics from the United States Department of Labor show restaurants and food service businesses employ 11.6 million people across the nation. It is hard work and accidents will happen. These include burns, exposure to chemicals, and physical injuries. Safety in the workplace should be a priority and food service employees must stand together to achieve this goal.

Why should anyone care if they are not part of a union? The simple answer is that union advocacy benefits all Michigan employees even if they are not members. Big corporations and special interest groups have been relentless in their attack on workers’ compensation. This resulted in 2011 legislation that made it much harder to collect benefits. These changes would have been much worse if organized labor did not help fight back.

You don’t need workers’ compensation for a tablet