Science fiction movies show what jobs to avoid in the future

Our list of science fiction movies and the occupations you should probably avoid in the future. 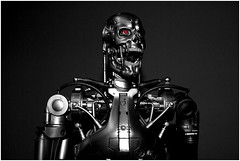 Wired published a fascinating article entitled “Robots Will Steal Our Jobs, But They’ll Give Us New Ones.” It looks at how advancements in robotics and AI could transform the workforce. Millions of jobs lost to automation could lead to new occupations.

We have blogged in the past about the most dangerous jobs. These lists are typically generated using U.S. Department of Labor statistics and data.

What occupations in the future will be considered the most dangerous? Here is our tongue-in-cheek list of future jobs that you should avoid according to science fiction movies.

1. Terminator – It has been suggested that robots are still going to need humans for maintenance and repair. Getting hired to fix a killer robot called the “Terminator” does not seem like a solid career choice.

2. Maximum Overdrive  – This 80s cult classic was written and directed by Stephen King. It shows what happens when semi-trucks become automated and go on killing sprees. Maybe Google and Tesla should reconsider their plans to create self-driving vehicles or at least install a really big off switch for people hired to service them.

3. 2001: A Space Odyssey – Stanley Kubrick’s epic film shows a sentient computer named Hal murder its operators when it malfunctions. Artificial intelligence will certainly be a game changing technology but perhaps we should be a little more careful when trying to disconnect it for repair.

4. The Matrix – Spoiler alert for a movie released in 1999! The Matrix is a computer simulated environment used to enslave mankind. Human beings are used as batteries for sentient machines. This occupation gives a whole new meaning to the job title “battery tester.”

5. Transcendence – Johnny Depp gives a wonderful performance when his consciousness is uploaded into a super computer that uses nanotechnology to artificial enhance human beings employed by his company. The medical benefits are great but giving up free will seems like a deal breaker.