How Tasers are helping keep order in prisons and have reduced the cost of workers compensation claims by corrections officers. 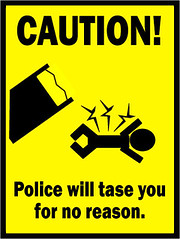 The Detroit Free Press has a story about the introduction of Tasers into the Michigan corrections system. Assaults on prison employees have dropped significantly and there has been a 61% reduction in workers compensation cases between 2011-12.

Use of Tasers is not without controversy and other factors surely played a role in the savings. However, it does appear that Tasers have caused a drop in assaults of prison guards by inmates.

We think this article is fascinating because of the ethical issues it raises. How far should employers go to reduce workers compensation costs?

We have represented several corrections officers who sustained injury while fighting with an inmate. This is a stressful and dangerous job. But are Tasers really a better option than just hiring more staff?

We encourage employers to look at new ways to keep their employees safe. But how far should employers go to reduce workers compensation costs?

Privacy issues are a big concern. Should employers be able to subject employees to constant video and audio surveillance? This recently came up with the introduction of safety goggles that stream video in real-time over Wi-Fi. The idea was to cut down on fraudulent claims.

Our experience shows that an investment in training and safety can save employers money in the long run. The best way to reduce workers compensation costs is to avoid having an injury in the first place.